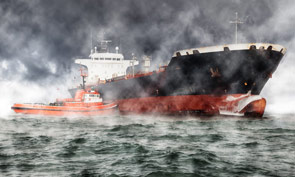 While road transport is speeding up, global shipping is slowing down to meet new economic and environmental challenges. In fact, the world’s largest cargo ships now travel significantly more slowly than the tea clippers of the 19th Century and some journey times could more than double.  Maersk, the world’s largest shipping line, has adapted its giant marine diesel engines to travel at super-slow speeds without suffering damage. This reduces fuel consumption and greenhouse gas emissions by 30% and the company is believed to have saved more than $83 million on fuel since it began its go-slow.

While that is good news for the climate, the global warming that these measures are designed to combat are already increasing the risk to your cargo. Climate scientists have identified that hurricanes and typhoons are increasing in strength with average wind speeds increasing by 5% over the past twenty years. Wave heights in many parts of the oceans are also rising steadily year on year. A study by scientists at Oregon State University concluded that the highest waves in the Pacific NW may now be as high as 46 feet/ 14 meters (a 40% rise from 1996 estimates) and they predict the new 100 year high may exceed 55 feet/ 17 meters. Rising global temperatures are also leading to greatly increased humidity levels and that is a further threat to the integrity and lifespan of your products especially with longer transit times.

This combination of much longer exposure to significantly greater risks poses a number of threats to your business. Consequently, it is more important than ever that your high-value or hazardous cargos are secured to the very highest standards and protected against these increasingly challenging conditions.  Cordstrap’s CornerLash™ cargo securing solution offers unparalleled security within containers and is specifically designed to work with add-ons such as flex boards, dunnage bags and moisture control systems to deliver even greater levels of protection.  As a result, it has secured   CTU Code certification from both German Lloyds and Mariterm and is approved by the American Association of Railroads. So you can be reassured that your cargo will be secured against both the stresses of a challenging sea journey and forces of up to 4G which it may encounter on the rail network.

65% of losses during transit can be put down to poor securing of cargo and this will rise as extended journey times and extreme weather add to the vertical and lateral stresses the contents of containers are subjected to. Securing the future of your business in a changing environment starts by securing your cargo in the best ways possible. To discuss how Cordstrap is uniquely placed to do that for your business, click here.